How global demographics are changing

Not so common people

There are few more famous or longer lasting discussions in economics than those started by Thomas Malthus in the late 1700s. The gloomy English cleric argued that populations grew geometrically (i.e. exponentially) and food supply grew arithmetically (i.e. could only grow at a finite rate). If this were true, at some point in the future there would come a crunch where population growth would outstrip the growth in the food supply. Food would run out, resulting in mass deaths from starvation and disease, and in wars for resources.

Malthus felt the most effective way to protect the planet’s future was by couples having fewer children, through either abstinence or delaying marriage until they had the means to support a family.

In response to this, there arose the ‘Cornucopian Optimists’, who believed that rising populations were a good thing – more people meant more ideas and inventions to solve Malthusian problems.

Populations have soared, but so has human ingenuity

When Malthus wrote his theory, there were one billion people on earth; now we have close to eight billion.

The population rise has indeed been geometric, with each additional billion people being added at a faster pace than the one before. There have been famines, diseases, and wars up to and including the present day. However, population growth has been powered by scientific developments that have enhanced our understanding of human health, and in turn helped to increase lifespans. Productivity marvels such as fertilisers and crop protection chemicals have enabled ever-rising food production, and modern refrigeration and supply chains have improved distribution. The result of this is that the growth in food supply has easily exceeded the rise in the number of mouths to feed.

Of course, the major downside of this is that ever-increasing consumption has led to rising environmental issues such as pollution and a warming planet; issues that we have only just started to tackle.

Despite the United Nations estimating a rise to nine billion people by 2050 and 11 billion by 2100, if trends seen in recent years continue, populations in many countries could be set to peak and decline in the next couple of decades. 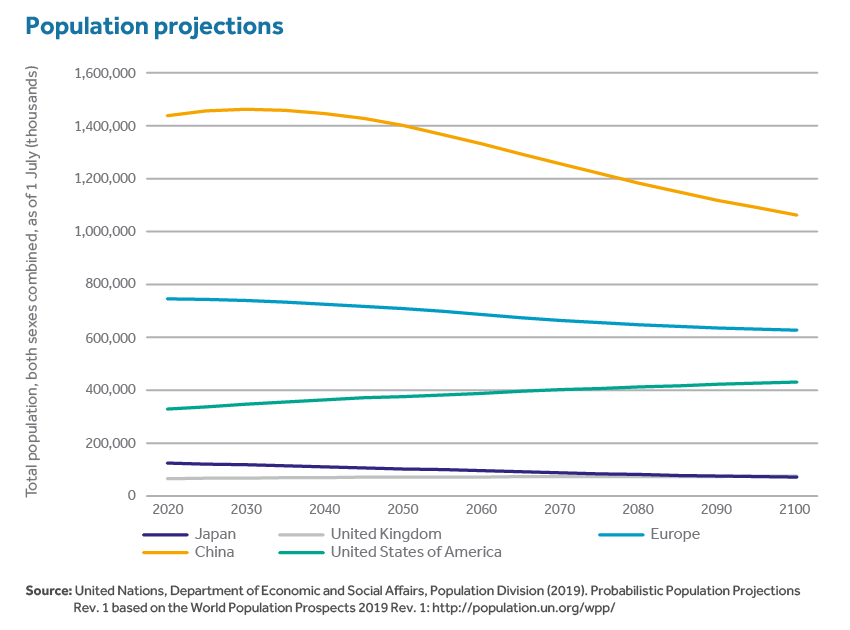 One country is already experiencing a long-term decline in its population: Japan, where the economic and population trends may foretell what could happen in Europe. Its deflationary economy in the 1990s preceded Europe’s by 20 years; modern-day central bank policies of zero interest rates, and rapid accumulation of government debts as we have seen in Europe in recent years, were seen there in the 1990s.

Japan’s demographic profile may also provide a clue to what awaits much of the rest of the world in the next few decades. The workforce peaked ten years ago and is falling rapidly, resulting in a worsening challenge to support its aging population – the oldest in the world.

In the twelve months to April 2022, the Japanese population shrank by 644,000 people. This was not just due to COVID-19, as the number of over-65s actually went up, but rather by a long-term decline in the fertility rate (defined as live births per year per 1,000 population). To maintain population growth in a sustainable way, countries require each woman to give birth to an average of 2.1 children. In Japan the fertility rate has collapsed from 3.4 in 1950, to 1.3 for most of the last decade.

However, it is no longer just Japan – around 50 countries now have declining populations, in part because of plummeting fertility rates. Not a single European country has a fertility rate approaching 2.0, with many of the larger ones like Italy and Spain closer to 1.0. Perhaps the most interesting one to watch is China, which is now suffering from the ‘one child policy’ introduced in 1979. Despite relaxing this to allow two children in 2015 and three from last year, the birth rate is still below 1.5. China’s rising urban population seems more focused on the numbers 6-9-6 – working from 6am to 9pm, six days a week.

Many reasons are cited for the trend of falling fertility rates, which has been happening in many countries since the 1960s. These include access to birth control and greater female empowerment, the desire to pursue a career, couples marrying later in life, and the rising expense of raising children. The intense workloads needed to support modern lifestyles – such as those in urban China – do not tend to allow for children. Globally, many people seem to be choosing to have fewer children as changes in society and greater wealth allow greater freedoms.

However, this can create problems over the very long term. An ageing society means fewer taxable workers to pay for the rising health and social care needs of an elderly population, placing government finances under strain.

Older people tend to consume less (with the exception of health and social care), reducing the level of aggregate demand for goods and services. We may see less invention and dynamism in areas such as science, art, economics, and business, as fewer people are actively involved in the workforce. And in geopolitics, the world could look very different in a few decades, with the currently emerging countries becoming more wealthy and populous, and the current dominant economies ‘turning Japanese’ as the economic balance tilts south and east.

Positives and opportunities for investors

Given the correlation between fertility rates and the cost of raising children, investment is needed. Investors will have to think and act globally to capture these opportunities. With China predicted to see its population halve by 2100, the current tension between it and the west may also diminish, and the US may rethink its current policy of ‘containment’ towards it. In time, China may simply become less of a threat to US economic and political hegemony as the population shrinks.

And finally, while these trends are very long term, it will become increasingly important to save and invest for later life. As Theodore Roosevelt said, “Old age is like everything else. To make a success of it, you have to start young.”

To learn more about the impact of global population change or to discuss any aspect of your investment portfolio, please request an initial consultation with an investment manager. It’s free and there’s no obligation to go further.

If you want to find out more, get in touch...

If you want to find out more about wealth management and learn how this can benefit you, we can put you in touch with our team of experts that can help.

This is not a recommendation to invest or disinvest in any of the companies, themes or sectors mentioned. They are included for illustrative purposes only. 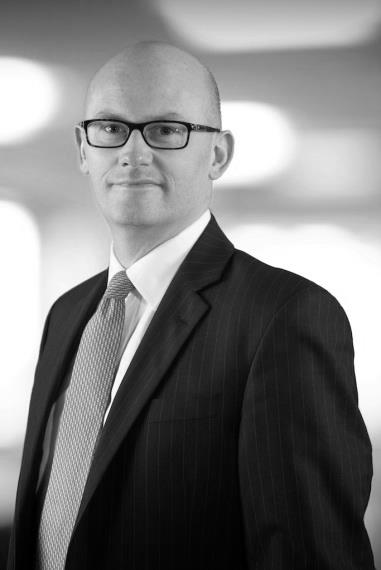 Stuart is responsible for managing discretionary portfolios for clients, including ALPS. He is a member of the CGWM International Stock Selection, UK Small Cap Stock Selection and IHT Committees.